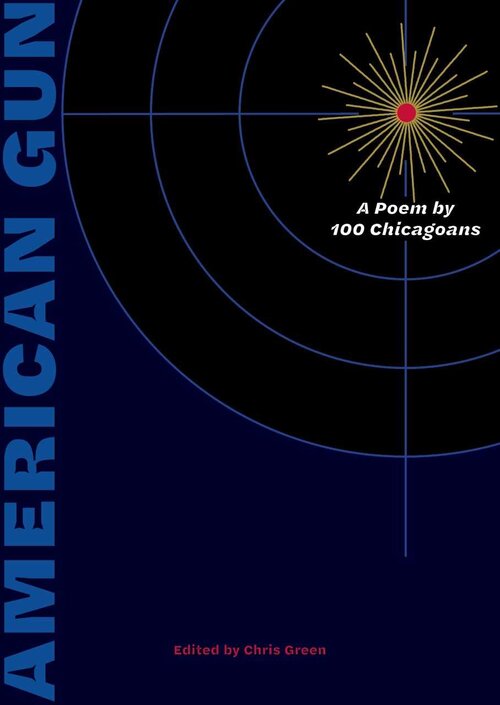 American Gun: A Poem by 100 Chicagoans is a collective response to the individual suffering behind the statistics. Big Shoulders Books editor Chris Green asked one-hundred poets from across the city to take turns writing a communal poem about Chicago’s gun violence. The poets range in age, gender, race, ethnicity, and poetic experience. Such well-known poets as Ed Hirsch, Haki Madhubuti, Ed Roberson, Marc Smith, Ana Castillo, and Kevin Coval write with teen poets from the South and West sides . . . many from the group Young Chicago Authors, but also young poets from Chicago’s alternative high schools, where statistically, students experience the most gun violence in the city.

The poem is a pantoum, a poetic form where every line is repeated twice. Green chose this form because its structure of repeating lines mirrors the semi-automatic firing of a weapon and also the seemingly endless cycle of shootings in Chicago.

In 2019, Chicago police seized over 10,000 guns—an average of one gun every 48 minutes, which gives you a sense of how many weapons are on the streets. However, the main title of this poem, American Gun, points to the gun epidemic as not simply a Chicago problem, but an American one. Despite the rhetoric of conservative political and corporate interests, most Americans (including NRA members) want more sensible gun laws. Our country needs more truth, more collaboration—something like this poem where diverse people sing together in sanity and beauty. When politics fails us, poetry tells us we are not alone in our outrage and hope.

Meredith Boe is a Pushcart Prize–nominated writer, editor, and poet. Her work has appeared or is forthcoming in Passengers Journal, Newfound, Another Chicago Magazine, Chicago Reader, Mud Season Review, After Hours, and elsewhere, and her chapbook What City won the 2018 Debut Series Chapbook Contest from Paper Nautilus. View all posts by Meredith Boe